Peter Smith and the Blockchain adventure

IFinance attended the Forward Partners Live event where the CEO of Blockchain, Peter Smith, gave a witty and honest account of his journey to the top.

Brian Rose opened the debate by stating that “tech is about people” and Peter Smith is definitely one of the most influential people in the tech industry. As part of the London Tech Week, the CEO of Blockchain was invited by Forward Partners to share his experience and insights.

Growing up in a small town in Georgia, Smith longed for adventure and wanted to experience the buzz of an urban environment. That’s how he ended up coming to London and then travelling through East Africa and East Asia. Whilst in Singapore, he became interested in bitcoin.

The first product he designed was meant to facilitate the use of bitcoin and understand its value changes. Now Blockchain is providing three types of products. Firstly, Explore, which Smith described as a “Google meets Bloomberg” service for bitcoin systems. Secondly, an API platform that can be used by businesses to build many types of services. And lastly, Blockchain produces very popular software and infrastructure. Although, this last type of product is used for 80,000 transactions per day (55% more than Transferwise) Smith says it doesn’t bring enough money to the company.

Thunder Network is the most recent project developed by Blockchain and it is essentially a protocol that should allow higher scale and velocity of payments. There is a huge potential in systems that connect machines and enable large scale automation. Currently Thunder is very unusable but Smith hopes it will be applicable to real life cases soon.

Smith shared that he found the prospect of smart contracts exciting. However, he stressed the fact that they are technically very challenging, as many things can go wrong and their development strongly relies on experience-based skills.

When he was asked how to achieve successful bootstrapping, Smith replied that the secret is not spending. Blockchain has an efficient strategy to reduce expenditure as much as possible. He also advised to raise capital continuously through savings rather than just when needed.

As there were some bitcoin and blockchain newbies in the audience, Smith gave a short crash course into major fintech notions. For instance, he defined bitcoin as a unit of digital currency and a p2p value exchange protocol. Smith admitted he was sceptical about bitcoin 2.0 being used on the market in the near future. “We have just built the model T, we can’t send a rocket to the moon yet”, he explained.

He also claimed that bitcoin probably wouldn’t become mainstream for e-commerce as people are already well served, especially in the U.S. According to him, bitcoin makes more sense in underserved contexts such as in developing countries. He went on to explain that bitcoin provides an edge for people living in unstable macro-financial systems (e.g. in Venezuela).

According to Smith most banks don’t really get bitcoin. The transition from banks to tech companies will probably reveal which will survive and which will become obsolete. Successful startups are finding gaps in the traditional financial systems and filling them. Transferwise was mentioned as an example, as it identified a problem of mistrust in the banking system and it took advantage of this weakness.

Regarding the safety of bitcoins, he argued that as society adjusts to innovation, the innovation itself seems less radical and illicit uses tend to decrease.  Bitcoin is also more robust than other digital currencies because the community has had the chance to learn how to use it from past experiences and mistakes.

Surprisingly Blockchain is not based in the Silicon Valley but in New York. Smith claimed that NYC is in a reconsolidation phase and that it currently nurtures very strong fintech and e-commerce companies. NYC also benefits from its proximity to Boston and the Silicon Valley. On the other hand, London benefits from its proximity to the rest of Europe (although the latest events might compromise this advantage point). Smith seems to consider that London has a good ecosystem and a rapidly expanding tech scene but he also believes that funding may drop rapidly. From his experience, Smith defined Nairobi as a promising tech scene which has had significant progress over the last 5 years. This has mainly been enabled by the scarcity of regulatory limitations.

At the end of the event, Smith shared his thoughts on being the CEO of a successful and innovative company. “The struggle is real”, he admitted. He claimed that because CEOs are involved in every aspect of their company, they can’t do enough of anything and so they can’t be really good at anything.

Learning to cope with failure is one of the hardships Smith had to face as a manager. He claimed that managers need to be vulnerable with their team and tell bad news fast, good news slow. According to him, a good CEO should also be aware of all the flaws of his/her product and work constantly to improve it. He advised to seek customer advice as soon as possible to speed up the improvement process. The biggest challenge Smith is facing at the moment? Staying awake and keeping his energy up!

Smith is currently looking for new talents to join Blockchain in London, so if you are passionate about this area of fintech now is the time to take your chance! 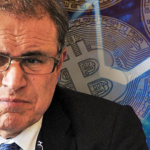