President Donald Trump has had experience with bankruptcy. This will prove to be useful as his tax plan, if approved by Congress, will push the US ever closer to financial disaster. The 2016 US trade balance deficit was over 500B. The national debt is 19.9T with an ever-increasing budget deficit and a debt to GDP ratio of 105%. The retail sector situation is apocalyptic and will probably worsen in the near future.

Given these fundamentals it is only to be expected that the US dollar will continue its downward path. However, as prominent economists have noted, the use of the dollar as an international reserve currency and the demand for dollars because of various reasons (petrodollars, safe haven) have resulted in the continued strength of the greenback.

In this context the current euphoria on Wall Street recalls the 1929 crash and the buoyant mood before the downturn in 2000. The sluggish recovery that began in March 2009 has been accompanied by a record surge in equity prices that has become the second-longest bull cycle in history. With several economic indicators showing negative signs, it is only to be expected that a correction if not a real crash in stock prices is to be expected before long, notwithstanding the usual Wall Street hype.

If confidence in the US economy falters, the dollar could easily lose 50% of its value on Forex markets. For this to happen, a combination of increasing federal debt, continued huge negative trade balance deficits and a stock market crash all together might suffice. The catalyst could be rising interest rates as the Fed is presently planning more increases in 2017. This has been sufficient in the past.

On the other hand, shrewd and clever Europeans might think that they could place their euros in safe dollar-denominated investments at higher interest rates and help the dollar index skate north only to be disappointed when the thin ice breaks.

US debt held by foreign countries amounts to 5.9T. Should any of these creditors decide that the time had come to convert their dollars into their local currency, panic could ensure. That would have far-reaching negative consequences on the global economy. China and Russia are already preparing a dollar alternative.

This Newsletter has advised investors to sell dollar stocks as the prices are at record highs. With the dollar as strong as it is going to become, it would also be wise to take advantage of the high dollar to buy local currencies. Even the euro would be an alternative if there is a dollar crash. Forex traders should be careful about entering into long positions on the US dollar. Tempus fugit, and time decay is an enemy. 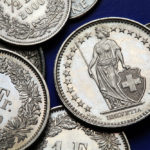