A cura di Walter Snyder, Swiss Financial Consulting
President Donald Trump in his talk at the WEF (World Economic Forum) in Davos presented the US as a great market to invest in. It is true that the stock markets have continually hit new highs in 2018, but the records on Wall Street do not necessarily indicate that the economy as a whole is doing well.
This Newsletter has already discussed the low unemployment figures and concluded that the low numbers put out by the government do not reveal the real employment situation nationwide. In addition to that, the indebtedness of companies has reached new heights thanks to borrowing at extremely low interest rates to finance stock buyback programmes that push up prices for equities without there being any real economic basis for the high valuations.
The President avoided the doom and gloom foreseen by this Newsletter in his encomium of the American economy. He also failed to mention the huge trade deficit and the looming credit crunch that the Fed is preparing thanks to interest rate hikes and the planned reduction of the central bank`s balance. One must admit that Trump is a good salesman in that he mentions positive points and omits what could be construed to be negative.
The fact is that market observers have seen that US equities are extremely overbought and despite that the market continues to climb into uncharted territory with some indicators actually going off the charts. Such a situation may be considered to be unsustainable. Last week the stock market started stuttering.
The President has said that he favors a “weak” dollar, and that is exactly what he is getting if the Forex valuations of the greenback continue to head southward. Another factor that is important is that EM debt that is in US dollars will be easier to service in a weak dollar environment. It is beneficial for EM countries for the dollar continually to lose value as they can then export more easily to the US.
At this point, as Maurizio Novelli has pointed out, the American consumer will be able to finance consumption only with more debt, and the high indebtedness of American consumers due to auto loans and credit card debt makes it doubtful whether much more of the same can be tolerated before insolvency rears its ugly head. Delinquency rates on car loans, credit card debt and student debt are rising. What is even more frightening is that corporate debt is very high, and rising interest rates will make it extremely difficult for companies to service their debt. This time things may well be different due to the extreme environmental conditions prevailing. 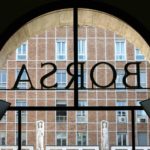