A cura di Walter Snyder, WWS Swiss Financial Consulting
Financial media pushed the panic button last Wednesday and Thursday only to see a rally on Friday. It finally dawned on the hoi polloi that rising interest rates can influence markets. It has been clearly shown that the Fed has a peculiar knack for bringing about recessions thanks to good intentions while putting up interest rates. So with the Fed busy normalizing rates and trying to trim its balance sheet, it might seem that the usual routine is playing out as it always has. This game is called “Blame the Fed”.
This time is really different because the debt factor was not present during past crises. The US federal debt is now over $ 21.6 trillion, and the deficit for 2019 is predicted to exceed $ one trillion. The cost of servicing the debt is also going to increase and will put the Treasury under pressure. One can add to this very high personal debt for credit cards, auto loans, student loans and mortgages,  all of which do not encourage consumer spending.
Then there is the crisis of US pension funds that are underfunded. Retirees are going to find that their pension fund is not going to have the money to pay the pensions that have been promised to them. Pension funds may have to borrow money in order to make payments. The pension system could become a sort of Ponzi scheme while a stock market drawdown would be fatal.
In addition to national and personal debt and pension fund malaise, corporations have been digging themselves deeper and deeper into debt with many zombie companies staying afloat only because investors are desperate for yield and buy HY (junk) bonds from companies that are not earning enough to service their debts. This corporate Ponzi scheme is not a secret.
The problem of corporate debt is rather serious as many companies have made debts to finance share buyback programmes. This has contributed to raising share prices, thereby making shareholders happy and enriching executives. Profits have also been directed towards share buybacks. On the other hand investment in Capex (capital expenditure) and R & D (Research and Development) has suffered. Companies have not concentrated on building new production facilities, training staff, developing new products and increasing efficiency. They will not be prepared when the looming crisis comes. At that point adherents of the Doom and Gloom Club will gloat over the carnage wreaked by a perfect financial storm. The Germans call it “Schadenfreude”. 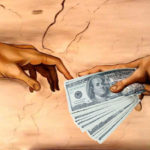