The mighty US Dollar in peril

Being contrarian is risky because present trends indicate one direction while the contrarian points in another direction. The US dollar has strengthened markedly in the last few months thanks to forward guidance from the Fed, and Wall Street is bloated with one new record price rise after another. The US can spend $ 581 billion on defense (International Institute for Strategic Studies) or $ 610 billion (Stockholm International Peace Research Institute), depending on whom one wants to believe, but the fact is that US defense spending, at a rate of 2.3% of GDP, is about one-third of military spending in the world (2014/2015).

QE made the US richer by having the Fed increase its balance to $ 4.5 trillion. Simply typing a number into a computer created a huge mass of liquidity, and the greenback is growing stronger every day while Europe and Japan go on with QE as if they were contrarians with the US already having concluded “tapering”. The US current account deficit has continued to exist despite the drop in imported oil, and that should make one wonder how the US dollar can flourish in the Forex market.

The American domination of financial markets is partially due to the position of the dollar as the most important global reserve currency. There is no other currency in such large amounts available for trade, so the Americans can type numbers into computers and not really pay for all the goods that they import. It is, therefore, no surprise that American comments on the candidacy of the yuan to become a recognized world reserve currency are strongly negative. The arguments claim that there is too much regulation, there is a lack of convertibility and similar chants seem to be trying to persuade Ms Lagarde to block China`s request that the yuan be put in the same category as the US dollar, euro, British pound and Japanese yen, namely, as one of the currencies that provide the basis for SDRs (Special Drawing Rights) of the IMF (International Monetary Fund). The Swiss franc and Canadian dollar are also important currencies, but do not have the depth required to become global reserve currencies.

As the yuan becomes more and more important as an international reserve currency, it is the US dollar that will suffer as a consequence. Once the Europeans straighten out their debt crisis, the euro will also encroach on the dollar. It is therefore questionable that the dollar will maintain its overvalued present position in the markets. In the short term, buying dollars makes sense, but it does not in the long term. The boom in the Chinese stock markets is a harbinger of things to come. 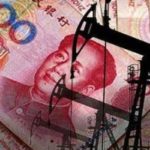