China and the Dollar

This Newsletter has maintained that the US dollar is overvalued and that investors would do well to move out of that currency. In the long run the national debt, which is currently 106% of GDP, and the balance of payments deficit, currently running at about 40 to 45 billion dollars a month, are unsustainable. Of course the US is the largest single economy globally and has huge reserves of coal, oil and gas besides extensive farming land. So it is not to be expected that the US dollar is going to collapse. It could soon however gradually lose 20% to 30% of its current value.

The problem is aggravated by the Fed`s ZIRP and NIRP policies that have resulted in the elimination of price discovery in the bond markets and higher equity prices in the US. The ECB has done pretty much the same in the EU with Japan attempting to escape from stagnation by employing unconventional tactics. Trying to raise interest rates will mean that the government will not be able to service the huge debt that has been accumulated after the crisis of 2008. At the same time companies have financed themselves with low-interest corporate bonds, and the bond market would be subject to high volatility should a tendency to raise interest rates emerge.

It is in this context that the entry of the renminbi into the reserve currency basket of the IMF takes on added significance. It is a symptom of the Chinese plan to wield more influence internationally in decisions that affect global finance. China faces various problems in promoting this endeavor, one of which is that the government in Peking has about 3.5 trillion US dollars that it does not want to be devalued in the process of divesting itself of this amount. At the same time the Chinese want their currency not to be revalued with the consequent effect of making their exports more expensive and thus less competitive in world markets. At the same time opening up internal markets could destabilize the local economy, which the authorities absolutely want to avoid.

The conclusion is that in their attempt to promote the renminbi as a widely-used global currency that can compete with the dollar the Chinese financial world has to tread carefully between avoiding a rapid decline in the value of the dollar while increasing the amount of renminbi circulating internationally while at the same time keeping the exchange rate of the renminbi stable with a slight tendency to lower values.

The odds of the Fed raising rates by 25 basis points in December are at present fairly high and would result in a further strengthening of the US dollar. It is therefore important for investors to understand that the dollar may go even higher at the end of 2016 and the renminbi may go even lower at the same time. In this context the plan of the IMF to promote SDRs as the world reserve currency should be taken into consideration. While the US dollar is still the dominant currency in world oil markets, a shift to SDRs would mean a great change in the demand for US dollars. One step in this direction is the issue of bonds in SDRs, which China is promoting.

Our view is that the Chinese plan is to encroach gradually on the dominance of the US dollar while the yuan takes its place as a major reserve currency. The smart investor sells high and buys low. The dollar is still high and will probably go a bit higher before it begins its descent. Equity prices are high and might go a bit higher before the market turns south. The realignment may take some time or may accelerate in 2017. In any case now is a good time to get started in order to avoid the rush. One could start with buying physical gold with US dollars. Gold is still cheap. 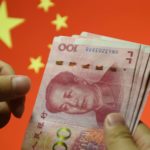