The recent G-20 meeting in Osaka between Donald Trump and Xi Jinping did not bring about a definitive resolution of the trade war between China and the US. Most commentators called the results of the encounter a “truce”. China was to purchase a substantial amount of American agricultural products while the US would not impose more tariffs and relent to a certain extent in persecuting Huawei. Both agreed to continue talks on solving the trade dispute.

It is questionable whether such an agreement can be called a truce as all the tariffs imposed hitherto remain in force. Trump’s threat to impose tariffs on the remaining $300 billion of Chinese goods imported into the US has merely been postponed and the persecution of Huawei has not been ended. The Chinese promise to purchase soybeans is not much of a concession in that such purchases were normal before Trump began imposing tariffs on Chinese goods.

What has happened is that a trade dispute begun by President Trump has morphed into an American attack against China in that the Americans believe that there is a risk of China becoming the global leader in technology. Huawei is the leading company in the development of 5G, and the American government has challenged Huawei`s position. To be clear, it is no longer a question of Trump wanting to correct the negative trade balance with China because of neomercantilist thinking. It is an all-out commercial war against the emergence of China as the global leader, and the attack on Huawei is evidence that trade imbalances are not the cause but only a symptom of China`s ascendance, which the American neo-cons cannot countenance.

Given this view of developments, the agreements made in Osaka are not at all a truce but a lull in the ongoing conflict. President Trump and his entourage seem to be thinking of the 2020 presidential election according to many analysts while the Chinese are thinking long term, and that means twenty to thirty years in advance. In any case the trade war is probably not going to end well either for China or the US. The Chinese will seek alternative suppliers for electronic equipment and new markets to sell their goods while American consumers are soon going to have to cope with rising inflation for most of the gadgets that they buy as it will be difficult for US wholesalers immediately to find alternative sources for basic goods. The outcome is not going to be a resulting win-win situation. 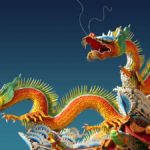