China in the Red

Long-term planning is typically Chinese, and the great increase in indebtedness in China is not an accident. Western commentators are quite right to note that debt has recently increased tremendously in the land under Beijing`s control, but they seem to be missing the point. The PBoC wants the renminbi to become the leading global currency, and this plan must obviously have been approved by the all-mighty Party.

In order for yuan to be functional globally, there must be enough of it to supply the demand in all markets. The US dollar is at present the leading global currency because there are large amounts of dollars floating around outside the country. There are not only Euro-dollars; there are dollars everywhere. One of the reasons why the Fed indulged in QE was to ensure that there were sufficient dollars in circulation not only in the US but everywhere. The crisis of 2008 burnt so much money that it was necessary to replenish the money supply. Of course the US Government wanted to save the big banks and other companies in difficulty, but at the same time the Fed wanted to supply the lubricant required to keep the gears of the world economy turning. The Fed`s balance went up to 4.5 trillion. One can add to that the increase in the national debt, which stands at 19.92 trillion at present with a current annual deficit of 593 billion. One really wonders how the US dollar can continue to be the preferred global currency. The reason is simple, namely, because there is not any other that can compete with it at the present time. It is the international currency by default.

The Chinese increase in debt should be placed in this context. The PBoC has to increase the amount of yuan in circulation. The US increased the dollar supply by initiating QE and creating trillions of sovereign debt. US credit card debt, student debt, car loan debt, mortgage debt, commercial debt, company debt, local government debt, state debt, federal debt, etc., all contribute to increasing the supply of dollars with lots of dollars going abroad to cover the enormous annual balance of trade deficit. So why do Western financial analysts take the Chinese to task for creating debt? It was to be expected that the PBoC would open up the credit gates.

But there is an important difference. The Chinese are piling up physical gold as are the Russians. When the paper gold market burns up, physical gold price discovery is re-established and China has 10,000 tons of the yellow metal, yuan will compete with dollars globally as the necessary infrastructure is already in place. 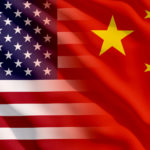